http://www.rit.edu/~w-uphysi/uncertainties/Uncertaintiespart2.html
Posted by Hong Qin at 6:31 AM No comments:

Because some strains are extremely sensitive to H2O2 so their Cv is very small, which leads to large fluctuations. So, Cv/Cb is more stable, and this is my best choice from the practical perspective.

Email ThisBlogThis!Share to TwitterShare to FacebookShare to Pinterest
Labels: windows 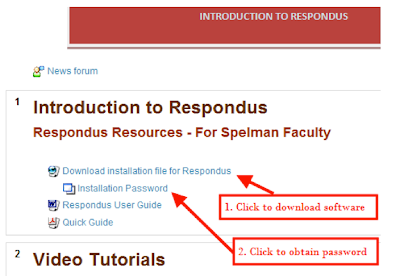 
Multicollinearity does not influence the prediction of response (y), but it affect the interpretation of individual predictors.

https://onlinecourses.science.psu.edu/stat501/node/82
Posted by Hong Qin at 2:17 PM No comments:

*** How to generated correlated random numbers with specifed R-squared

AIC ( preferred model is the one with the lowest AIC value)

Email ThisBlogThis!Share to TwitterShare to FacebookShare to Pinterest
Labels: statistics

Email ThisBlogThis!Share to TwitterShare to FacebookShare to Pinterest
Labels: regression 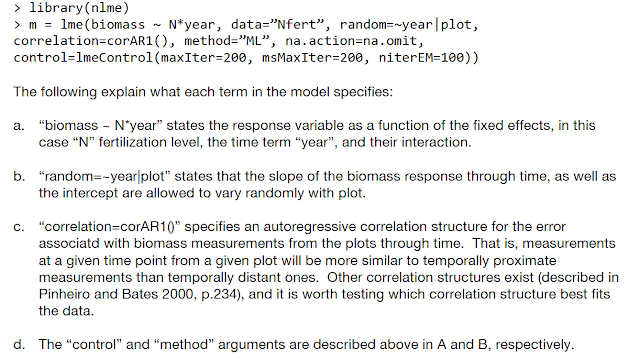 Email ThisBlogThis!Share to TwitterShare to FacebookShare to Pinterest
Labels: regression

Last time we discussed problems in retrieving genes associated with SNPs that have OMIM IDs. One of the problem is that some OMIM entries in the OmimVarLocusIdSNP table do not have genes listed. I just tried searching the genome database at UCSC using the SNP_id, and got the corresponding gene names.
For example, "188890" is associated with 11 SNPs and the query results are:

In this section, EGLN2 gene is also mentioned. 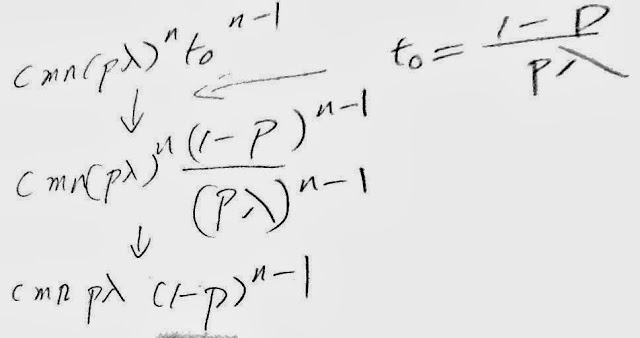 So, if the SWK12 molecular pacemakers occur in yeast, they are very conserved genes.  Maybe, I could simulate the aging of the evolutionary core network, and then study how the recent network component change the aging dynamics of the core network.  This is a way to see how evolution influence network reliability, i.e., network robustness. 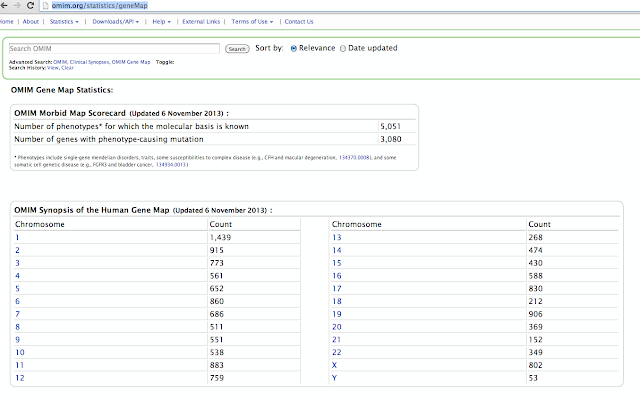 Email ThisBlogThis!Share to TwitterShare to FacebookShare to Pinterest
Labels: evolution

LIFE EXTENSION BY DIETARY RESTRICTION IN THE BOWL AND
DOILY SPIDER, FRONTINELLA PYRAMITELA

Survival curve of the bowl and doily spider is exponential in the wild, indicating that sth is kiling the spiders regardless of ages. This is commented as non-aging characteristic.

Email ThisBlogThis!Share to TwitterShare to FacebookShare to Pinterest
Labels: aging


A simple table from SNPedia:
http://www.snpedia.com/files/gbrowse/SNPedia.gff

Email ThisBlogThis!Share to TwitterShare to FacebookShare to Pinterest
Labels: hSNP

Hmm, it seems OMIM record can be different from other database:
http://snpedia.com/index.php/Rs686

RS686 is clearly linked to DRD1 gene on SNPedia.

Student's and my notes, dbSNP project

I could not found anything related to OMIM or clinical significance in the extracted info.

"What dbSNP report format will provide both a SNP and its specific OMIM ID number?

The easiest way you can get all the SNPs with OMIM links is from Entrez SNP:

1.Go to the Entrez SNP site.
2.Click on the grey “Limits” tab near the top of the page (just beneath the text search boxes).
3.Select the organism you are interested in from the organism list located at the top left of the page.
4.Scroll down the page almost to the bottom, until you find the list of “Annotation” limits. Select “OMIM”
5.Press the “Go” button located at the top of the page next to the empty text search box, and you will receive a list of your organism’s SNPs with OMIM annotation.

You can also get those SNPs with an OMIM ID number by downloading from the dbSNP FTP site: the OmimVarLocusIdSNP table contains the information you need for your organisim of interest (human, in this case). This table is located in your organism’s organism_data directory on the dbSNP FTP site."

Columns of OmimVarLocusIdSNP table are:

1omim_id.
2The locus id the SNP is on
3 omim variation id.
4locus symbol
5Amino acid using the contig reference allele.
6Amino acid position in the protein.
7Amino acid of the snp variance.
8var class (used for internal dbSNP processing)
9snp_id (rs#)
The last column should be the SNP rs ID. The 4th column seems to be gene name which may be mapped directly into the human protein network.

How to automatically forward emails to other accounts in Lotus Notes


Here are my steps to set up automatic forwarding in LotusNotes. The steps can be slightly different in different versions of Lotus Notes. The basic idea is to set up a Mail Rule that can work with most emails.

In Lotus Notes, go to the Mail window and click "More". 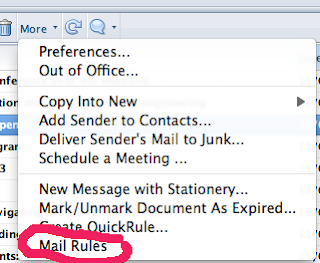 Choose "does not contain" for this rule, 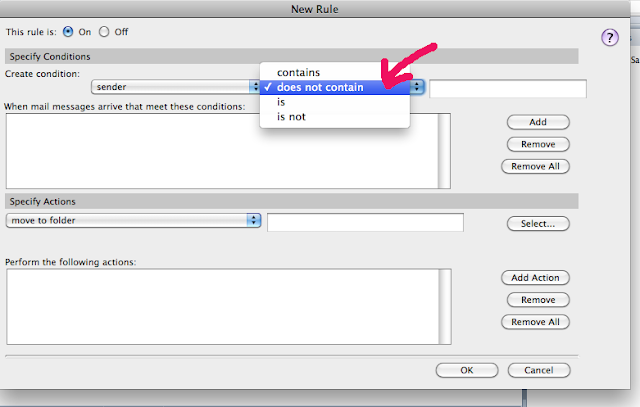 Type some weird letters to make sure they are unlikely to be in most emails, and then click "Add" 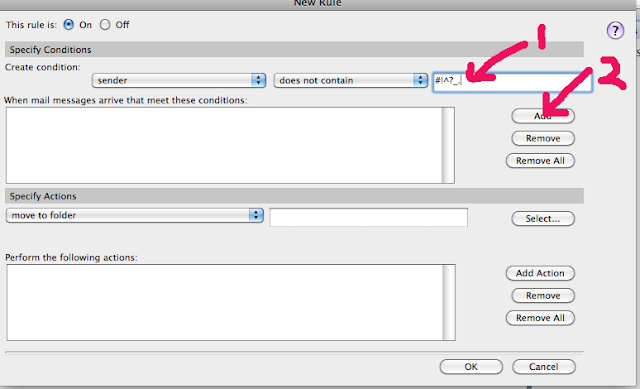 For the action part, choose "send copy to", 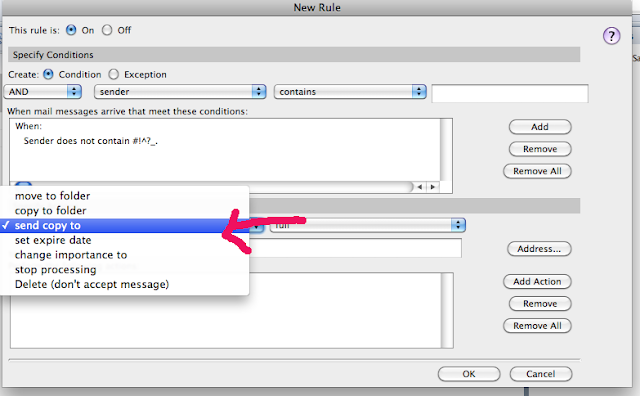 Enter the email address that you want to forward and then click "add action", 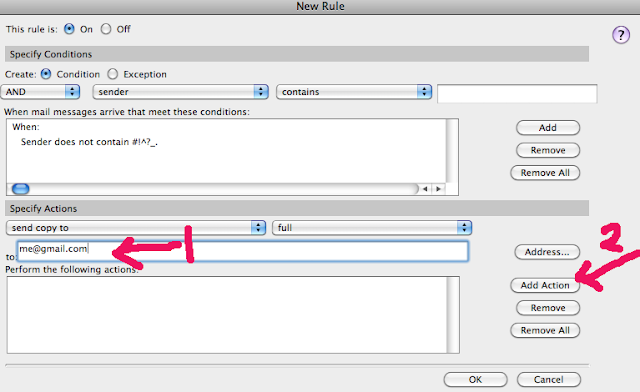 You should now see the rule in the window beneath. Click "OK" to complete this procedure. 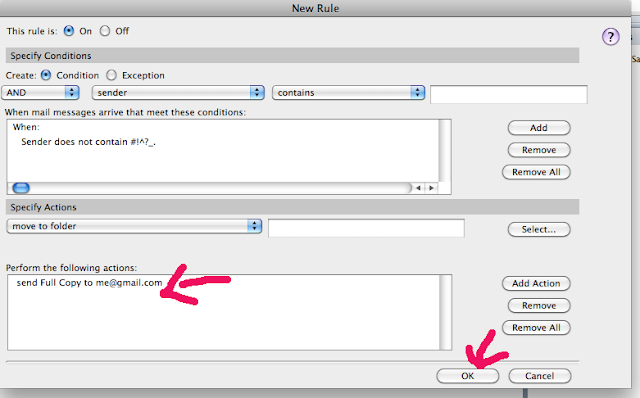 Now, you should this active rule in the mail rule window. 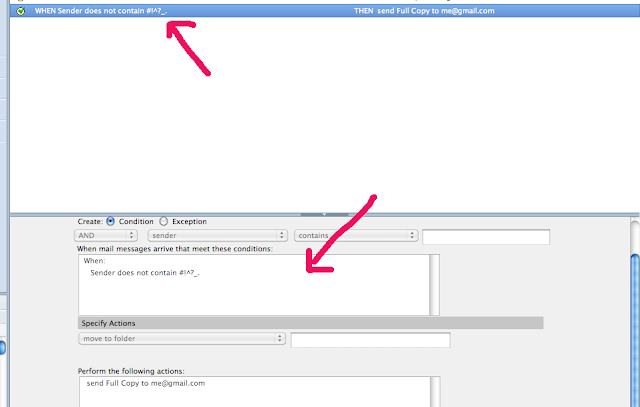 You can now send yourself an email to test wether this mail rule works or not.

Note: Every now and then, when Lotus Note are updated, mail rules can stop working because the versions between your account and the server are not the same. You should ask your systems administrator to update your LotusNote configurations.

Electronic JSTOR link:
https://login.ezproxy.auctr.edu:2050/login?url=http://www.jstor.org/jstor
Posted by Hong Qin at 8:10 AM No comments: