Topics on biology, genetics, and food

Olfactory sensing account for most of the food flavor.

Lactase versus amylase, in human evolution

A new paper just out in Nature Genetics gives us another example. In this work, researchers found that groups that tended to eat more starch had more amylase in their spit. This makes some sense as amylase is the protein that breaks down starch into sugars we can use.

When a single genetic mutation first let ancient Europeans drink milk, it set the stage for a continental upheaval. http://www.nature.com/news/archaeology-the-milk-revolution-1.13471

The genes identified were CYP1A2 (Cytochrome P450 1A2), which has previously been implicated in the metabolism of caffeine, and AHR, involved in the regulation of CYP1A2. Individuals with the highest-consumption genotype for either gene consumed ~40 mg more caffeine than those with the lowest-consumption genotype, equivalent to the amount of 1/3 cup of caffeinated coffee, or 1 can of cola.


How do we taste food?

Humans only recognize five tastes, but we can recognize thousands of smells. It is the way the brain puts together the tastes with the smells, temperature and mouth feel that creates our perception of "flavor".  As much as 85% of the perception of taste comes from the sense of smell

Sense of taste and smell

The variables seqfile, outfile, treefile, noisy, Mgene, fix_alpha, alpha, Malpha, fix_rho, rho, clock, getSE, RateAncestor, Small_Diff, cleandata, ndata, fix_blength, and method are used in the same way as in baseml.ctl and are described in the previous section. The variable seqtype specifies the type of sequences in the data; seqtype = 1 means codon sequences (the program is then codonml); 2 means amino acid sequences (the program is then aaml); and 3 means codon sequences which are to be translated into proteins for analysis. 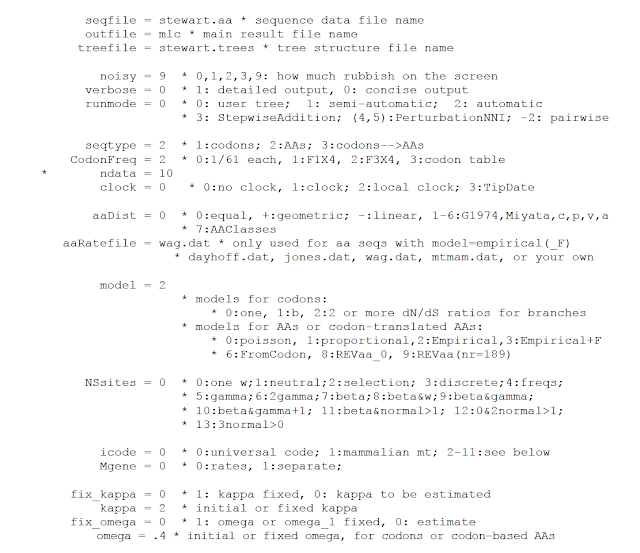 
References:
Posted by Hong Qin at 2:39 PM No comments: 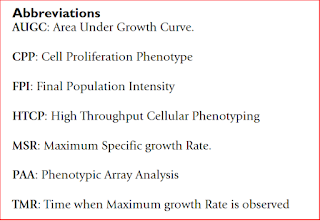 This model is an extension of the simple logistic function

where the numerator is replaced by the carrying capacity, and time is adjusted by TMR.

This paper provide the fitting results to  'wells' in a plate in S4 table.

I did not find measurements for individual strains, perhaps because this is a method paper.

Both approaches used the concept of carrying capacity.


Reference:
2013 Oct 5,
The following 2012 NBT paper measured growth and aging in a modified BY4741 background.
http://www.sysbiol.cam.ac.uk/Muellederetalnbt2442.pdf

The state of the component is defined by a vector x_i=0 or 1 for a failed and functioning component.
Structure function of a system is $\phi(x)$ = 0 when system failed, and 1 if the system is functioning.

Although the minimal and maximal values are very intuitive,  the mathematical formula for the parallel system took me a few minutes to grasp. To solve the parallel \phi(x), we first look for the opposite state vector, i.e., (1 - x_i).  Product of (1 - x_i) indicate a failed parallel system. So, the function system is 1 - product_of (1 - x_i).

Combination of series and parallel sub-units can be used to study complex systems.

What component should be we focus on to improve a systems's reliability? For parallel system, the limiting factor is the most reliable one (Page 39).

Mixture of survivor function is discussed in Secion 3.5, page 77. This is directly related to my power-law network model.

Leemis09 discussed Gompertz distribution on page 112. Leemis09 stated that Gompertz hazard function is derived from the assumption that Mill's ratio, 1/ harzard function = resistance to death, and h(t) decreases over time at a rate proportional to itself:
$d(1/h(t) / dt = k (1/h(t))$
Solution to this assumption leads to a exponential function.

One relationship map for continuous univariate lifetime distributions is provided in figure 4.9 on page 114.

Email ThisBlogThis!Share to TwitterShare to FacebookShare to Pinterest
Labels: reliability


Maybe there are too many objects in this 'push'. I  compressed files into a few packages, but this problem persists. It seems large folder size cause the 'hung up' problem. A few hours later, I tried to sync folder individually, and each time seem to work fine. Maybe the GitHub has problem of handling large sync job?!

Around 22:20, it took about 15 minutes to push a 1.6G tar.gz file to Gitbhub. So, it could be GitHub server respond slowly during the busy work hours.

To make python 2.7 the default (i.e. the version you get when you run 'python'), please run:

Started Xcode 4.4+, command line mode has to be manually installed. 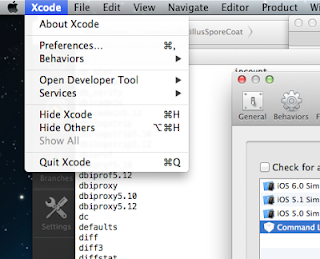 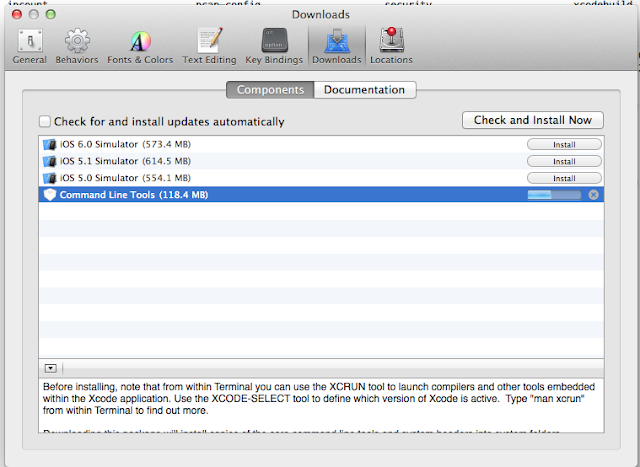 MacPorts installation is always up to date. Afterwards, you may search for ports to install:

where <portname> is the name of the port you are searching for, or a partial name.

To install a port you've chosen, you need to run the port install command as the Unix superuser:

Install GitHub with free GUI for a Mountain Lion computer

From http://git-scm.com/download/mac, it automatically downloaded  "git-1.8.1.3-intel-universal-snow-leopard.dmg".  Installed the pkg file.

From mac.github.com, download the free GUI. File "mac_GitHub for Mac 111.zip" was downloaded. Unzip this file give the GitHub application.

This was shown to be an "Application", so I dragged it to "Application" folder. Double-click this application, the following welcome window was shown. 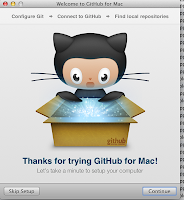 Then it asked for name and email that will be used in the commits. It seems that a public email address has to be used. So, I chose hqinlab@gmail.com. I am not sure whether the name is the Github username or not, I input my username. 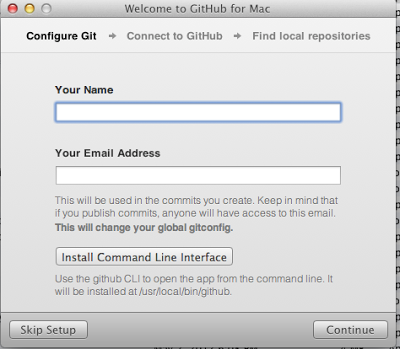 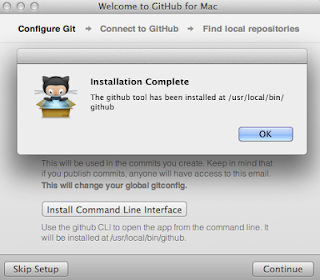 Then, it indicated that github tool was installed at /usr/local/bin/github.
"Continue" and it ask for Github username and password. 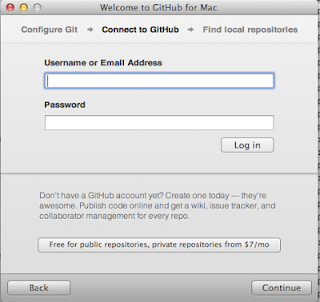 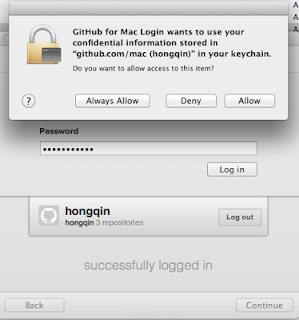 Confirmed this, and Continue. 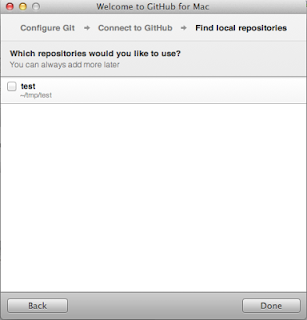 I chose test to check the installation. 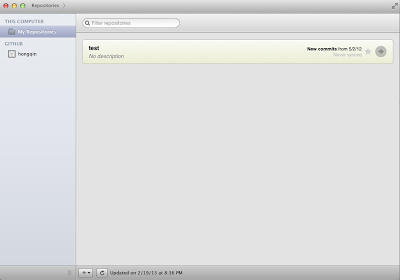 After 'pushing' the commit, I saw the 'test' repository on my GitHub page. Good. The installation is completed.

I then want to clone my existing repository on GitHub. It worked. Now, how to make the local copy a master-repository? It seems it clone the repository as 'master' by default under my GitHub account, which can be seen at the right corner of the bottom panel of the GUI window.


Although GUI-GitHub is easy to use, I had trouble to sync large folder using the GUI interface. In contrast, command line seem to work better.
$ git push --force origin master

On mountain lion OS, Quicktime allow selection of screen area for screen cast. I use Gimp and a blackground picture and adjust the canvas to 4:3 in size for youtube. At the end of recoding, Quicktime will save the video in *.mov format. I then use iMovie to edit them, and share them to Youtube within iMovie.

On Maverick,  generated movie can crop some edges. In this case, "Fit" style can be selected. During editing, "fit" can be applied to different time points. This is probably a feature that can used to zoomin on sth.

Error -8003 occurred when I try to empty the Trash bin on Snow leopard.

I 'mv' all file from .Trash/ to tmp/. I then 'rm -rf [a-Z]*', and deleted a lot of files. This enable me to find that files like "-BamBth.nwk" is the problem. The '-' at the start of these filenames were treated like switched. I then manually renamed all these files, and it solved the problem.

ifconfig down and up in osX

To reset a nework interface in osX

Customerize a heatmap with clustering panel in R

For Spelman students that want to take summer courses

Instruction for students to take summer courses, based on Dean Baxter's response.

Students wanting to take summer school courses should check with their department chair if the course is required by the major and the chairperson of the department in which the course is offered.  If a student who is a biology major wants to take calculus, for example, she would need to talk to Chair of Biology Dept (Dr. Lee) and Chair of the math department (Dr. Ehme).   The student would need to identify the school (which has to be an accredited school) and provide a course description of the course to the chair-- Dr. Ehme in this case.   If it is a general education requirement, she will need to get the chair's approval (chair of the department in which the course is offered) and the approval of her advisor (you) and the academic dean.  Students can get the summer school application from the Registrar's Office (the academic calendar posted on the website typically lists the date forms are available) and a transient letter from the Dean's Office (It is a letter that is sent to the prospective school to verify the enrollment status of the Spelman student and to give the school permission to allow the Spelman student to register as a transient student.  Grades earned by transient students can be transferred to Spelman, thereby allowing the students to earn the credit (hours) and grade.  Simply put, here are the steps:
1.  Student identifies accredited college ( 2 year, 4 year or community college)
2.  Student gets a description of desired course from website or school's bulletin (catalog).
3.  Student gets a summer school application from Registrar's Office once applications are available (see academic calendar for available date).
4.  Student meets with chair of department in which course is offered and presents description of course.
5.  If course is comparable, department chair will sign application to approve course.
6.  Students then meets with her departmental chair or faculty advisor to secure permission to take course.
7.  Students comes to Dean's Office (Rockefeller 103) to get final approval signature and transient letter.
8.  Once student has completed the course, she must request an  official transcript of the grade (s) be sent to Spelman by deadline noted on academic calendar.
Posted by Hong Qin at 9:27 PM No comments:

The 2003 Spelman Rearch Day will occur on Friday, April 19th from 8:00 AM to 5:00 PM. Research Day embodies the capstone experiences of our students-their scholarly quest to inquire, discover, imagine, explore and create. Research Day is one of the liveliest events in the Spelman year, featuring students' scholarly and creative work , and the ideal opportunity for undergraduates to showcase their capstone research experience across all academic disciplines. Please encourage
your students to submit their abstracts/summaries of work by the deadline: 11:59 PM, Sunday, March 10th . Abstracts are limited to 250 words. The following link may be used for submissions effective today:

Research Day 2013 is an opportunity for students to showcase their academic accomplishments, and for many it is one of the first steps they take while at Spelman which illustrates academic excellence. We encourage each student to participate in Research Day 2013, and consider this as a true gateway to reaching excellence within her chosen field.

List of interesting cases for Bio380 critical analysis in biology


parents age and health (SAT score), probably not a politically correct one.

http://onyxftp.mykonicaminolta.com/download/SearchResults.aspx?productid=1138 (used by the IT rep) 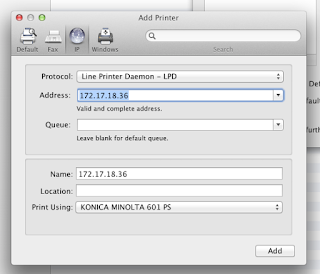 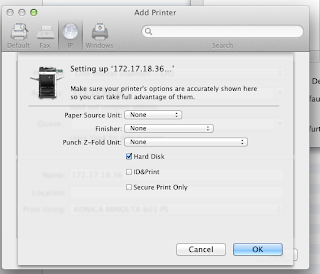 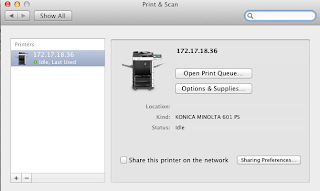 I tried to print a test page, but was unable to, because the authentication was never setup.

It turns the authentication is in print control. 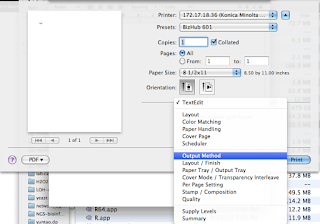 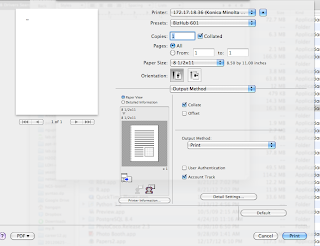 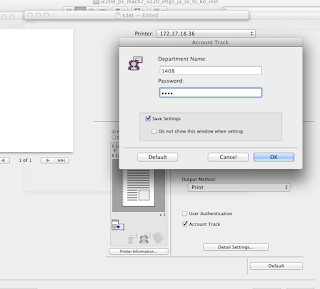