Kilometers versus miles: Does it really matter? 2014 report.

The link between metric systems, scientific literacy and attitude.

The daily life in the U.S.A. is based on customary units separated from the international systems of units (metric system) that are taught in sciences. Does this partition of daily life and scientific understanding hinder the scientific literacy for the American population and impose a negative connotation on science as a whole? These are the questions that we set to investigate. We designed a survey to gauge people’s scientific literacy and acceptance of scientific findings, while taking into account confounding factors such as educational background, gender, country, and age. The survey contains 3 sets of problems: one set on proficiency of the metric system, one set on scientific literacy, and one set on attitude and acceptance toward science. The survey is administrated online and through paper.

We previously reported our findings using 200 participants. The survey received 300 responses recently, and enabled us to analyze the link of proficiency of metric systems to scientific literacy and attitude toward science.

First, we found the scientific literacy is significantly associated with proficiency of metric system (Figure 1), which is perhaps not a surprise because science is taught in the metric system. This correlation suggests that people that are familiar with scientific knowledge are also more proficient at metric usage.


Third, we found that attitude toward science is significantly associated with age, suggesting that old people tend to have better attitude toward science, even when metric proficiency is controlled (Figure 3).  Because the current survey involved many faculty, it is not clear whether this association is due to our biased samples or not.  When educational degree is controlled, age is still significantly correlated with attitude toward science, and this correlation persists when people with Ph.D. are excluded from the analysis. This might mean another bias: People participated in the online survey tend to be more inclined toward science. On-campus survey were often done by papers, and target students that are not interested in science. This bias can only be mitigated by targeting a broader population.

Ages of Participants by gender 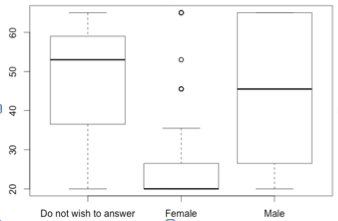 Things to do:
Some further analysis that I want to do. If people choose 'yes' for "My religious views are more important than scientific views", would answers to the rest of the attitude questions become predictably negative on science?

Note on 2013 Nov 15, I may use interaction and auto-correlation to address the sampling bias.